Please, No Jokes About Sax Appeal

Growing up listening to the pop radio hits from Motown inspired young Steven Banks to fall in love … with the saxophone.

“I started out with the clarinet when I was 12 or 13,” he says. “But then I switched to the saxophone, ‘cos it was cool-looking, and I’d heard all those great Motown records. Switching over was an easy transition.”

Don’t expect the Ithaca College assistant music professor to serve up the famous sax break from He’s a Rebel when he appears in Chautauqua Auditorium with Peter Oundjian and the Colorado Music Festival Orchestra on Sunday, August 1. Banks’ appearance will serve to remind his audience that the saxophone is equally at home in the concert-hall repertoire.

He’ll play two works he identifies as “chestnuts”: Alexander Glazunov’s Concerto and Jacques Ibert’s Concertino da Camera. The two are musical twins for several reasons. They were written in France within a year of each other (the Glazunov in 1934, Ibert’s the following year), and both were commissioned by the legendary pioneer saxophonist Sigurd Raschèr (1907-2001).

“It’s really about bringing the best of both worlds,” he said of the pairing. “Spontaneity is a core element (in the Glazunov). The way it’s written, you can feel like you’re improvising. That element shows how you can play what’s there.” Ibert’s non-stop Concertino, however, is quite a different story. The solo part in the outer movements offers a dizzying display of virtuosity. “While the Glazunov stays in the traditional range (of the sax) until the end, the first movement of the Ibert goes a full octave above that range,” Banks points out. Then, there’s that little matter of Ibert’s seeming disinterest in giving his soloist a chance to breathe. Its non-stop river of notes allows only occasional breaks for an intake of air.

Is our soloist bothered by such details? Nah. He credits circular breathing as the obvious solution. “I learned how to do that as an undergraduate (at Indiana University). My teacher was one of the best in the world at it. Actually, it’s becoming more common among young players these days.”

Circular breathing involves blowing notes into the saxophone or other wind or brass instrument while simultaneously inhaling air through the nose. A number of jazz players use this technique during elaborate, extended solos. Banks should know since he minored in jazz studies at IU. “I don’t claim to be a jazz saxophonist,” he insists, “even though I studied it.” 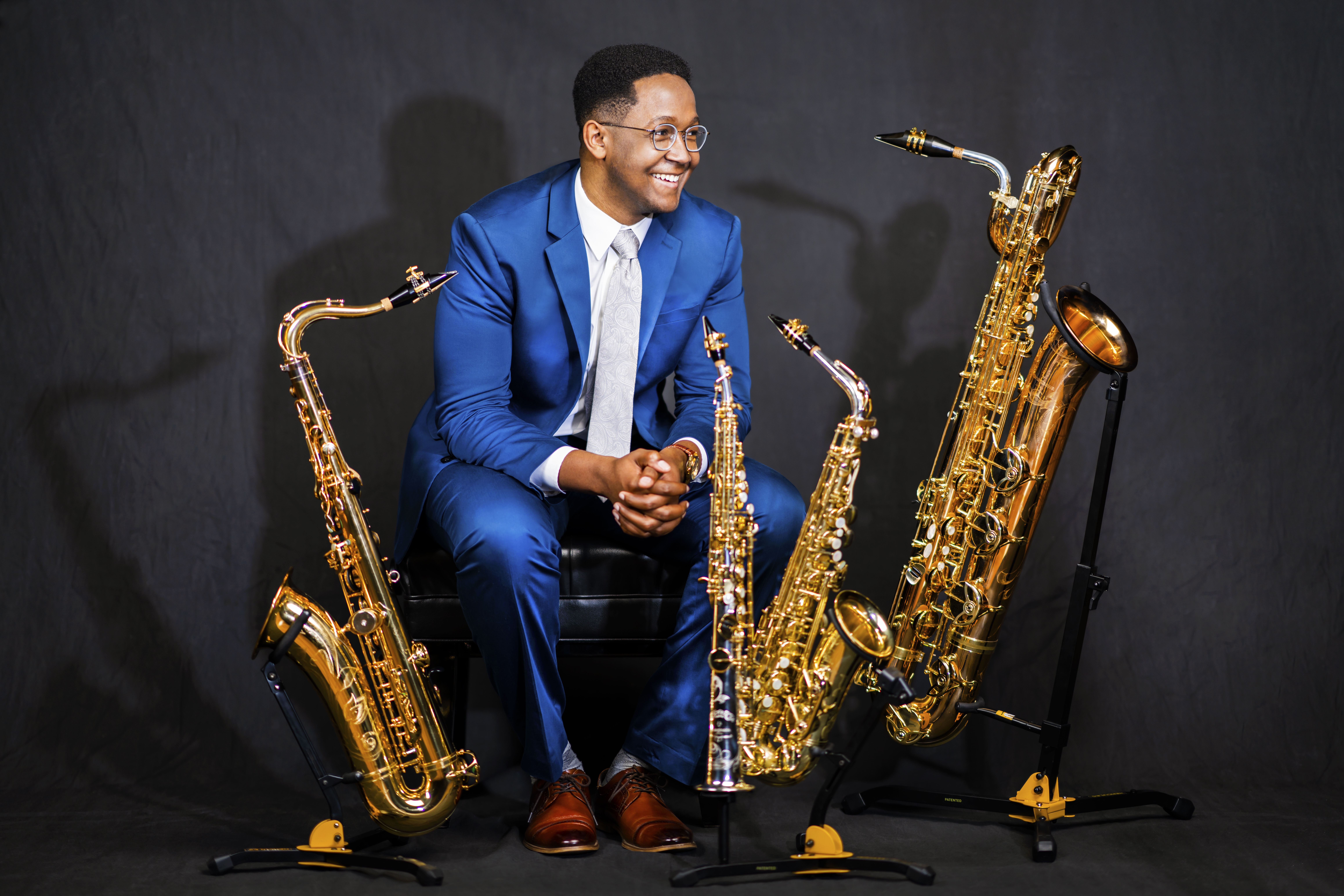 That said, he feels at home in both classical and jazz. “Whether it’s written notes or improvised ones, you’re trying to transcend what’s there in the music,” he says. “I encourage my students to explore all kinds of styles.”

Though the heyday of the sax in pop records has passed – not many hit songs from Motown of late – Banks points to the growing popularity of the instrument among the younger generation. “The level of playing is skyrocketing,” he enthuses. “The future is bright, and growing exponentially. The instrument itself is improving, the way it’s constructed. There are so many possibilities now.

“The repertoire is growing, too, slowly but surely,” he adds. “John Adams and Esa-Pekka Salonen have written concertos.” Banks has commissioned works from composers Billy Childs and Joel Thompson.

The invention of Adolphe Sax actually involves seven categories of instruments, from sopranino to contrabass. When Banks walks onstage in Chautauqua Auditorium, he’ll be wearing an alto sax for both concertos. Is that his favorite?  Banks doesn’t take a breath, circular or otherwise. “I started on tenor sax, which feels like home. To be honest, I will like whichever one I’m holding,” he replies.

Steven Banks will be soloist in saxophone concertos by Glazunov and Ibert at 6:30 p.m. Sunday, August 1 in Chautauqua Auditorium, Boulder. Also on the program, conducted by Festival music director Peter Oundjian, are works by Florence Price and Aaron Copland.